The first blog of 2014 is here, and we start off with some very interesting news surrounding the the long-awaited sequel to Beyond Good & Evil.

He mainly talked about what the gaming industry lacks at this moment; that being moments that stay with people forever ("No, I am your father", "1.21 Gigawatts?!", "You're gonna need a bigger boat", "What do they have in there, King Kong?")... something games, at large, have not achieved lately. 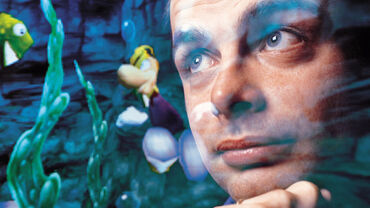 "I think there are some very memorable moments in games, and in the one I’m working on we try to make moments memorable and [imbue them] with strong consequences,” he tells us. “It’s not only about a single moment, but the whole journey that the player is led through in the world. In Beyond Good & Evil, we tried to make the player travel and discover different things, and I think it’s something that you really need… It’s like in a good story, or a good book, or a good movie: the whole book is supposed to bring you to this special moment. It’s meant to make you feel something very strong, even if it’s short. It’s something that we haven’t achieved yet [in the game industry]. I have the idea to build this kind of thing, but honestly, it’s something that we need to work on.”

“When we did Beyond Good & Evil, we really wanted to make something different, even if it’s in the style of a classic action-adventure game, and make a real experience game,” adds Ancel. “I think that it’s a game that people are still discovering, and maybe these kinds of games still have a place. We’re all waiting for games like The Last Guardian, after all.“

Much like David Cage (Fahrenheit/Indigo Prophecy, Heavy Rain, Beyond: Two Souls), Michel Ancel continued by saying the industry "Knows how to make games [...] but not how to make them exiciting and mysterious to play... we have to work on that.". In other words, he thinks the industry is to obsessed with "big cinematics, expensive sequences and trying to get massmedia attention". In order to be succesful, a game has to have some sort of attention from the media nowadays, but Michel Ancel thinks that the industry has to move forward and "explore other territories".

New consoles with better graphical capabilities do not necessarily make better games [Editor's note: Like the bunch of launch games for the PS4 and Xbox One], and is seems like Michel Ancel agrees with this ideology.

The full interview will be released in the latest issue of Edgeand will be available on February 13, 2014.

Retrieved from "https://beyondgoodandevil.fandom.com/wiki/User_blog:ZyLogic/Beyond_Good_%26_Evil_2_is_a_journey_through_a_world_with_strong_consequences?oldid=6512"
Community content is available under CC-BY-SA unless otherwise noted.