Today marks the day that 10 years ago, the DomZ-invasion was stopped, and conspiring of the subversives of the enemy Alpha Section were unmasked and unravelled by certain noble and courageous Hillyans from casting terror on our humble, blue planet in system 4 known as Hillys. Hillys being, afterall, full of strange creatures beyond count... we must be of little importance to the rest of the world.

Thanks to Shauni, and a lot of other members of the IRIS Network, and of course our beloved Governor, whose real names are still unknown to this day, we were prevented a certain catastrophe of immense magnitude (almost like that one time that a huge statue on the Selene was able to take us over). If it wasn't for them, we would all be smoked ham by now.

This month also marks the eradication of a mythological Greek (is that a spoonerism too?) creature We thought it had died 3000 years ago, but a remnants were found in the Nutripils Factory several days ago. The concern "Nutripils LLC.", creator of both the Starkos-snack (that Nacho-looking thing) and the famous K-bups boxes (we honestly have no idea what that is made of), has announced that the local facility in Hillys will soon pick-up work again.

The Hillyan Army was re-established as the main force of authority on Hillys, and was ordered to clean-up the trafficking that was conducted in both the Nutripils factory and the Slaughterhouses. Hillyans realised how valuable the Hillyan Army was before the Alpha Section came to our planet, and thus the citizens massively bought the Carlson & Peeters manual from their local bookstore, making it the highest grossing bestseller in both Systems 3 and 4, though Adhir's bestseller 'Beyond Good & Evil' - from Nietzsche got the second spot on the charts.

Black Isle, in the mean time, has been occupied for years by scavengers and miners, trying to find their fortune in these mines, though most have not caught up with reality (I've heard Mo in the Akuda Bar knows more about that...)

The Mamma-go Brothers, close to the southern Gate of Hillys City, is changing their method of payment. The company now accepts credits aswell, because for mysterious reasons, the pearl supply on Hillys has stopped. There hasn't been new pearl findings for 10 years. The brothers do, however, have a stellar-motor in stock that is actually working when you are in space. HTV News reports say that complaints were filed by anonymous customers after they had purchased a stellar-motor from the Rhino brothers... and where is Mamma gone to, anyway?

There are also rumours that Hillys got an 'HD-version' some years ago, but we fail to understand what is ment by this. We are also unsure what this darkroom is supposed to be, although certain individuals on HTV News (Fehn Digler) has reported that their personal accounts were hacked by hundreds of users, leaking classified information.

All irony aside, I am very pleased to have experienced the 10 years having played Beyond Good & Evil on several consoles with several purchases. I also want to thank IRISNetwork, BGEMyth, BGE Revolution and BGE Group for their cooperation.

Only good things can come from this, and I can fortell a happy future for Beyond Good & Evil. For now, let us cherish this moment that Michel Ancel, and all the other people that worked on Beyond Good & Evil created one of the most ambitious and greatest art experiences ever conceived in this industry.

I can only hope that this wiki will be the starting point of a new age for this franchise. 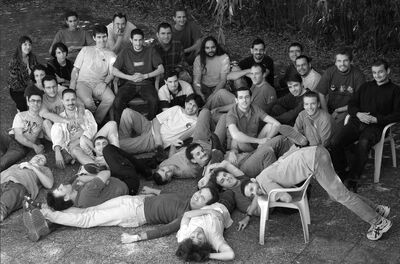 Thank you, Ubisoft Montpellier and Michel Ancel! May you prosper.

Retrieved from "https://beyondgoodandevil.fandom.com/wiki/User_blog:ZyLogic/10th_Anniversary_of_Beyond_Good_%26_Evil?oldid=6359"
Community content is available under CC-BY-SA unless otherwise noted.