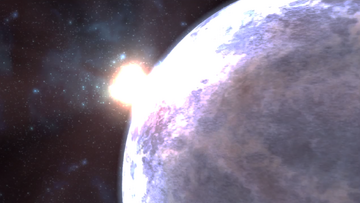 Hillys is a small and peaceful mining planet in System 4 that is mainly covered in water. Due to these geographical circumstances, there are a limited number of inhabited islands, which are presumably leftovers from volcano eruptions and earthquakes that occurred in the past. Hillys is known for its richness of Materia-crystals. Due to the mining, the islands are submissive to moderately-satisfying weather conditions.

To keep Hillys running, the government decided to construct several windturbines throughout the islands. These were constructed to provide an ecological form of electricity for all inhabitants. Choosing this form of providing electricity guarantees the level of ecology of Hillys.

Endangerment for all species[edit | edit source]

Ever since the planet has only been confirmed to inhabit the limited number of 55 species, the amount of windturbines stationed on Hillys have been exponentially increased.

Agents contracted by the Science Center are tasked to regularly photograph and update the Hillyan Fauna inventory. Due to these updates, the Science Center is able to examine the evolution of certain species—while still monitoring all species. Recent examinations by the Science Center have shown that new forms of DomZ creatures have started to inhabit Hillys, and perhaps adapting to the planet's atmosphere.

Hillys is ruled by a Governor, the governor has a small portion of the Hillyan Army at her disposal. Hillys itself takes part of an intergalactic commission.

Some time before the events of Beyond Good & Evil, the Alpha Section came to Hillys. The Governor did not attempt any kind of protest, thus the Alpha Section kept sending more of their reinforcements. Under suppression, the Hillyan government was told to limit and change a number of laws that protected the citizens of Hillys—these include laws that force citizens to send their personal information, such as income, to the Alpha Section.

Since a couple of years, the economy of Hillys has been going down. When the Materia-crystal mines were depleted, they had to be closed down—leaving hundreds of miners workless. The Alpha Sections have forced employees of the old Slaughterhouses out. These people are not given any kind of compensation in return, and in fact, there has not been a reopening date as well. Luckily, there are still activities done by the citizens, such as: fishing, producing Nutripils (K-bups) etc. Because of this: small, independent shops are very important to the overall economy.

The only known civilized location is an area, conveniently named 'Hillys' suggesting this may be the only civilized location on the planet, going by this logic it also has a very limited population, the only main living areas being Hillys City, and a few other houses around the country side and hills.

Retrieved from "https://beyondgoodandevil.fandom.com/wiki/Hillys?oldid=6496"
Community content is available under CC-BY-SA unless otherwise noted.